Turbines exist for LV, MV, and HV applications. Steam usage increases and efficiency decreases for each level of turbine. It is recommended to total up the number of EU used by machines at any time and provide sufficient turbines for them. At 100% efficiency, turbines use 2L of steam to produce 1 EU, but as efficiency decreases or increases more or less is needed. 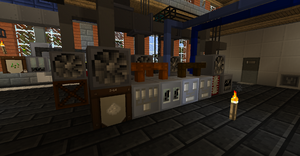 Multiblock turbines are larger, more complex to operate, and more expensive than single blocks, and require rotors, which need to be replaced every so often. In exchange for this they are much more efficient. Be careful with these- if you make more power than the dynamo hatch can output (I.E. make 2400 EU/t with an EV dynamo hatch) then the turbine will EXPLODE. Also, make sure that nothing is in the empty space 1 block in front of the front face of the turbine (where the "rotor" is visually showing), otherwise it can cause issues with the multiblock formation.

Large steam turbines are available at HV. While these are far more difficult to set up, efficiencies even over 100% are possible with the right rotor. They also have the advantage of returning as much distilled water as would be used to produce the steam, meaning you can re-use the distilled water in a Large Heat Exchanger which requires it, or store the distilled water to use later for other things.

The amount of power produced by a Large Turbine can be obtained by the formula: (nominal output) * efficiency. Nominal EU output will vary depending on what type of Large Turbine you're working with.

Keep in mind what units you're working with. Since the in-game tooltip shows optimal flow as Liters per second rather than Liters per tick, you will need to further divide by 20 to get EU/t. For example, an optimal flow 96000 L/s rotor on a regular Large Steam Turbine will generate 96000/2/20 = 2400 EU/t, before efficiency.

If provided with less than the optimal flow, proceed with normal EU output calculations as stated above, but multiply the final value by (actual flow)/(optimal flow). In other words, a less-than-optimal flow will give you a fraction of the optimal EU/t.

If provided with more than the optimal flow, it will accept up to 150% of the optimal flow in excess steam/superheated steam/gas/plasma, but it will not generate any excess power. Instead the excess causes an efficiency loss based on how far away from the optimal flow you are by 1 - (actual - optimal)/optimal. So at 150% of optimal, the efficiency will be 50%.

Right-clicking a rotor with a screwdriver will put it into "Loose" mode, which allows it to process a lot more steam, but less efficiently. If the efficiency of your turbines is more important, you can build more tight-fitting turbines, but if you don't have many resources to make more turbines, you can use less turbines in loose mode.

A Gregtech fluid regulator cover is extremely useful here in controlling the rate at which you feed liquid into a Large Turbine.

Power is output from the dot on the side, this can be changed with a wrench. Power must be output horizontally, cannot go on the top or bottom.

Steam can be piped into the machines, or automatically put in by auto-output from boilers, in any of the other faces, including the top or bottom. If using pipes, keep in mind that a LOT of steam is required per second, and make sure that you've got pipes that can put enough steam through.

Steam for single block turbines can be produced using several different types of boilers. 14 Small Coal Boilers would be required to create 1 amp of LV power, or 6 High Pressure Coal Boilers, or 3 High Pressure Lava Boilers. These are suitable for early-game power production, but would need to be upgraded before MV. One 2x2x2 low pressure Railcraft multiblock boiler can provide 1 amp of LV, while a 3x4x3 low pressure or 3x2x3 high pressure boiler can provide 1 amp of MV power, or 4 amps of LV. A Large Bronze boiler from Gregtech, while expensive, can provide 2A of MV or 10A of LV. Two large bronze or steel boilers, or one large titanium one, can produce 1A of HV.

With multiblock turbines, greater efficiency is possible, and producing power up to EV is viable. With 130% efficiency or higher rotors, 2 large titanium boilers can produce 1A of EV, if lower, 3 or 4 will be required. Large Heat Exchangers can produce lots of high pressure steam when fed hot coolant from a fluid reactor.