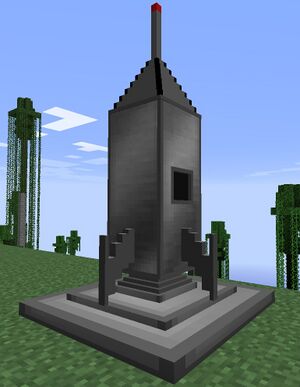 A Tier 1 Rocket, on launch pad

To progress in GTNH beyond Tier 4 (HV), you must travel into space to mine special ores needed for higher tier recipes. This is achieved by using the rockets found in the Galacticraft mod; however many of the recipes which would normally use Galacticraft machines are crafted by more difficult means.

The Dire Crafting Table is from the Avaritia mod. It is used for many difficult end-game recipes in GTNH. It is also used to craft the different rockets, instead of the NASA Workbench found in Galacticraft. Crafting the table itself requires several HV machines, and also at least one Nether Star. You will need a good source of Diamonds to make the Crystal Matrix, whether from mining or making Industrial Diamonds in the Implosion Compressor.

If you don’t want to farm multiple Withers for Nether Stars, you can duplicate them using Salis Mundis, which requires a basic Thaumcraft setup. To make Salis Mundis, you need to make Balanced Shards in the Thaumcraft Crucible. This requires at least one type of elemental Shards (found in the Twilight Forest), combined with all the other basic Essentia (earth, air, fire, water, order and entropy). The Balanced Shards are then processed in a Macerator to produce the Salis Mundis, which is then combined with Null Catalysts from Witchery to produce Nether Stars. Note that you will need an initial macerated Nether Star to begin making Null Catalysts. Make sure to save at least one Catalyst to continue duplicating them, or you will have to get another Nether Star and begin the process again.

To complete the Dire Crafting Table you will need an Elite Circuit. You will also need a Workstation circuit to make the schematics for the Tier 1 Rocket. For more information, visit the Circuit page.

The metal plates which are used for most of the rocket parts are made in the GT Implosion Compressor, rather than the Galacticraft Compressors. The Implosion compressor requires very little power to run, but you will need a large amount of explosives to use the machine. At HV you can make Industrial TNT (ITNT), which is most efficient for imploding.

You can also use the Implosion Compressor to make Industrial Diamonds for the Crystal Matrix (see above).

There is an optional slot in the middle of the rocket design that you can put a copper, iron, or gold chest into. This will add storage space to your rocket.

Now that you have your first rocket, you will need a few more items to actually get to space.

Once you are ready to go, lay your launch pads in a 3x3 pattern somewhere on the ground with view of the open sky. (Keep an eye out for Natura clouds above your base as your rocket will not pass through them and can get stuck, wasting fuel). Place your rocket in the middle of the launch pads and right click to enter it. You can now press F to view your fuel level, Shift to exit the rocket or Space to launch.

Before you launch, you will need to fill your rocket with fuel. Set the fuel loader down next to the launch pad. You can fill the loader either with Filled Fuel Canisters, or can pipe it in from a tank. (If you use a cell, the empty cell will be lost.) Place your battery inside the fuel loader to activate it. You will need your rocket to be at least 60% full to get to the moon and back (one canister fills it by 20%). Don't forget to pick up your fuel loader to bring along, if you didn't make a spare.

Once you launch, you can steer the rocket using your WASD keys but it is not necessary as you want to go straight up (unless there is a cloud in the way). Note that your launch pads will launch along with the rocket.

The overworld will fall away beneath you; you can view your height level relative to the world on the indicator to the left. Once you reach maximum height, you will enter a loading screen to the space map. (Don’t panic if it takes a while to load.) At this point you will see all the planets on the system map, as well as the option to make a space station if you happen to have brought the appropriate materials. With the tier 1 rocket you can only reach the moon; click on the overworld to zoom in, then select the Moon and click the Launch button on the top right.

Now your lander will fall toward the moon. Hold the space button to use a bit of fuel to slow down, or you will crash and lose your rocket. Your lander will set down on the moon’s surface, at which point you can press Shift to exit the lander. (Congratulations, you’ve set foot on the moon!) Right click the lander to retrieve your rocket and launch pads. You can also use an Empty Canister to drain any remaining fuel from the lander and reload it into your rocket. 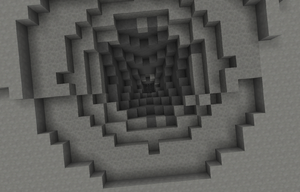 Entrance to a Moon Dungeon

The schematics for the higher tier rockets cannot be crafted, they must be found on planets (in tier order). To find the tier 2 schematic, for example, you must search for a Moon Dungeon and defeat the boss, which will unlock the chest containing the schematic. The dungeon will appear as an opening on the surface which leads far down and contains “unnatural” blocks as part of its structure.

For more information you can visit the Galacticraft Wiki at https://wiki.micdoodle8.com/wiki/Galacticraft

Retrieved from "https://gtnh.miraheze.org/w/index.php?title=Rockets&oldid=1314"
Cookies help us deliver our services. By using our services, you agree to our use of cookies.