This page contains information on the general IC2 Crops mechanics. For a list of crops, see IC2 Crops List.

Crops with no seed can only be produced through crossbreeding. Crops which list the same special drop multiple times have a higher chance of dropping that special drop.

Certain crops may require an ore block of the type of metal that they produce to fully mature to their harvestable stage. Place the ore block underneath the farm block that contains the crop.

Some crops are identical in appearance until they reach their final stage. Crops can be scanned with the Portable Scanner to identify it as it is growing. It will tell display the plant type, the plant's stats (Growth, Gain and Resistance), the environment stats (Nutrients, Humidity and Air-Quality), the plant's attributes and who discovered the plant. This is very useful if the player is crossbreeding to get new crop types or to increase stats as all the information will be displayed on the crop before it fully matures.

IC2 crops can be farmed in a couple ways. The first way is using the Crop Harvester from IC2 itself. This will harvest crops, but not fertilize or hydrate them. You will need a Crop-Matron and a large supply of fertilizer and water, or crops with high stats may die, depending on biome and elevation. The other way to farm IC2 Crops is using the Forestry farm multiblock, set to orchard mode using an intricate circuit board. This will harvest, fertilize, and hydrate the crops, using only a very small amount of fertilizer and water. It will also cover a larger area than the Crop Harvester, making it a very attractive option.

Be careful that you do not place seed bags with high stats onto crop sticks that your Forestry farm or Crop-Matron hasn't yet fertilized and hydrated. They could possibly die before the machine even gets to them.

IC2 Crops can receive bonus environmental statistics based on biome!

Weeds are a crop that will spread to empty crop sticks and destroy many other crops. Weeds and weed-like crops with higher growth stats attempt to spread weeds more often. Weeds can be removed using a Weeding Trowel or a Crops++ Spade or by breaking the crop stick and replacing it. Normally, weeds will only naturally spawn on empty crop sticks or double crop sticks. This means that you only need to watch for weeds while cross-breeding; once you have a full field of crops being automatically harvested, weeds will no longer be able to spawn.

However, there is an exception to this. Normal crops with 24 growth or higher are also considered weeds (or "weed-like") when they are at a growth stage of 2 or more (Venomilia, an exception, is weed-like when it is at its 5th growth stage and it has a growth stat of 8 or higher). Specifically, this means that the crop will attempt to spread weeds (real weeds, not copies of themselves) to adjacent empty crop sticks or to other crop sticks that do not contain weeds, overwriting any crops inside. However, other weed-type crops are immune to this effect. Because some crops do not revert all the way to their first growth stage upon harvest, this means that a standard, flat, fully filled field can contain a stable population of automatically harvested high-growth crops without needing to apply Weed-EX if the following conditions are met: 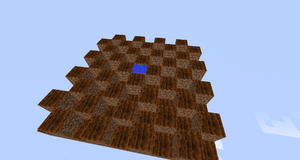 IC2 crop weeds cannot spread with this type of field because the crops do not directly touch each other. This enables the use of Gr 31 crops for crop types that revert to the first stage on harvest.

If these conditions cannot be met, such as because the crop you want to use reverts to its first stage on harvest, you can instead use a "height checkerboard" setup (shown in the image to the right) to ensure that no crops directly touch each other. This will prevent any weed spread from occurring, and will also lead to a slightly improved air quality stat.

Because crops with high growth can be a headache, many players instead only grow crops with a growth stat of 23 or less, as those crops will never overwrite neighboring crops with weeds.

Weed-EX is an item which can be applied to crop sticks manually or by a Crop-Matron, similar to water and fertilizer. Weed-EX will not be applied by a Forestry farm. Each crop stick has a storage for up to 100 units of Weed-EX (150 if applied by the Crop-Matron), which depletes by 5 each time a weed tries to spread to or spawn in the crop and must be replenished over time. It also has a 10% chance of depleting by one if it is in empty crop sticks and weeds do not try to spawn there in a crop tick. 50 units will be added each time Weed-EX is applied. When a crop stick has Weed-EX in its storage, weeds will never naturally spawn in it, and it will be immune to all weed-spreading effects.

Contrary to popular belief, Weed-EX causes no negative effects on crops which are not considered weeds (generally, crops with less than 24 growth or crops with 24+ growth that are at their first growth stage). However, Weed-EX can cause stat loss if used on a crop which is considered a weed. Specifically:

-Stat loss occurs only on the application of the Weed-EX.

-Stat loss will occur only if the Weed-EX applied was enough to leave at least 75 units in the crop's storage. A single application to a crop stick with none will give only 50 units and will not be able to trigger the effect.

-As mentioned earlier, stat loss will only occur on plants considered weeds. Normal plants with 23 or less growth, or with 24+ but on the first growth stage, are unaffected.

-Then, there is a 20% chance to trigger the decline if the Weed-EX was applied manually, and a 33% chance if it was applied automatically (by a Crop-Matron).

-Also contrary to popular belief, use or overuse of Weed-EX will not trigger any kind of 'flag' to be genetically passed down in the crop's NBT data. Weed-EX does not affect crop breeding, and no data related to Weed-EX is stored in a seedbag's NBT data. The only possible negative effect of Weed-EX is the stat reduction described above.

When it comes to usage strategy, Weed-EX can be indiscriminately applied to a breeding field to prevent weeds when a player is breeding plants with growth stats of 23 or less. When working with plants with 24+ growth, care must be taken not to apply Weed-EX (at least not to beyond 75) to plants at their second growth stage or higher. Weed-EX can still safely be applied to empty crop sticks (in preparation to plant or to crossbreed) or to crop sticks containing plants at their first growth stage. It is recommended to do so, because if Weed-EX is not used in this case, weeds are very likely to destroy those crops before they can grow.

Crop growth is divided into stages, the amount of which vary by crop, each with a different texture. Generally, crops can be harvested once they reach their final growth stage, though some, such as stickreed, can be harvested earlier for different drops. When a crop is harvested, it is not always reduced to the first growth stage, but is instead reset to a certain stage which varies from crop to crop (this is why fields of growth stat 31 crops can be safe from weeds without Weed-EX for many crops). In order to progress to the next stage, a crop must accumulate a certain number of growth points, which varies by stage and by crop. When they get that many points, their growth points will be reduced to zero and their growth stage will be increased by one -- excess growth points gained during a tick do not roll over into points for the next growth stage.

Crops have a "crop tick" every 256 game ticks or 12.8 seconds. When this occurs, they will gain an amount of growth points, called "growth rate" here, based on their growth, gain, and resistance stats, their tier, and their environmental stats (Nutrients, Air Quality, and Humidity). The calculations for this value are shown below:

First, the "base growth rate" is calculated based on the crop's growth stat, Gr and a random number between 0 and 6, inclusive, denoted X below.

Note: Some crops use different weighting for their environmental influences instead of the equal weighting shown above (when calculating "value"). These crops are (only base IC2 is currently covered in this table):

Then, if the environment value is greater than or equal to what is needed, the final growth rate (in growth points) gets a bonus of (value - needed)%:

If the environment value is less than what is needed, the growth rate is steeply penalized, being reduced by 4 * (needed - value)%:

If applicable, the growth rate is always rounded down.

Some crops have special behaviors which happen every crop tick (12.8 seconds) (only base IC2 is currently covered in this table):

Content in this page has been copied and possibly modified from the FTB Gamepedia Wiki ([{{{https://ftb.gamepedia.com/index.php?title=Crops_(GregTech)}}} {{{Crops (GregTech}}}]). Such content is under the CC BY-NC-SA 3.0 License.

Content in this page has been copied and possibly modified from the FTB Gamepedia Wiki ([{{{https://ftb.gamepedia.com/index.php?title=Crops_(Useful_Crops)}}} {{{Crops (UsefulCrops}}}]). Such content is under the CC BY-NC-SA 3.0 License.

Content in this page has been copied and possibly modified from the FTB Gamepedia Wiki ([{{{https://ftb.gamepedia.com/index.php?title=Crop_Breeding_(IndustrialCraft_2)}}} {{{Crops Industrialcraft2}}}]). Such content is under the CC BY-NC-SA 3.0 License.