In version 1.5 of GTNH the circuit system had a complete rewrite. Instead of a single circuit per tier like in previous versions, there are now three to four variants per tier each with a different recipe chain of varying material costs and machine requirements. 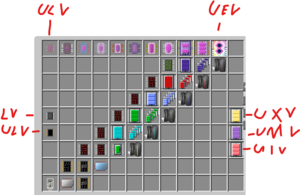 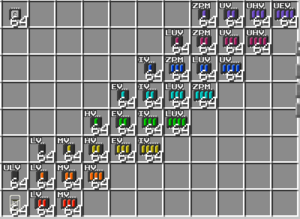 Each circuit from within the same tier can be used in recipes interchangeably - in place of each other. Thus the only reason to craft circuits further to the right in a tier is because they will be used in higher tier circuits, as explained in Crafting.

Each tier higher circuits will of course be more expensive than the previous tier, however, in each column displayed in the above spreadsheet, each next tier of a circuit, requires the previous tier circuit inside the recipe. For an example, an Advanced Circuit (IC2) requires Good Integrated Circuits in its recipe. But on top of that, Good Integrated Circuits then require Integrated Logic Circuits in its recipe. Strangely there is an exception in that Microprocessors are not required in any other circuit.

The further right you go in the spreadsheet, the recipes also get slightly more expensive. In MV for example, the Good Integrated Circuit will be a bit more expensive than the Good Electronic Circuit but can still be used in MV tier machines/components/etc. There is also the BartWorks Resonatic circuits if you want to have an alternative route. At a certain point, you'll need to build the Circuit Assembly Line, a multiblock similar to the normal Assembling Line, but for circuits. Otherwise you'll have to spend much more materials when crafting circuits. You need one for EVERY circuit you intend to make.

Retrieved from "https://gtnh.miraheze.org/w/index.php?title=GT_Circuits&oldid=2305"
Cookies help us deliver our services. By using our services, you agree to our use of cookies.