There are 3 combustion generators added by regular Gregtech, providing LV-HV power. Efficiency decreases slightly with higher-tier generators. These generators use their fuel intelligently - they only produce as much power as needed, and turn off if there's no power draw at all. They don't ever lose fuel over time, don't waste fuel idling, and don't need lubrication.

The basic combustion generator is available at LV. It produces 1 amp of LV power (32 EU/t) at 95% efficiency.

The advanced combustion generator is available at MV. It produces 1 amp of MV power (128 EU/t) at 90% efficiency.

The turbo combustion generator is available at HV. It produces 1 amp of HV power (512 EU/t) at 85% efficiency. 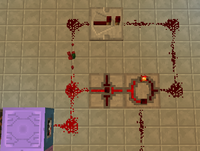 The combustion engine multiblock is, essentially, a larger version of the single block generators. Unlike the single block generators, it needs a supply of lubrication (1 cell per hour) and always produces the maximum amount of energy it can, even if it's being wasted. They produce 1A of EV power (2048 EU/t) at 100% efficiency by default, or can be boosted with a constant supply of oxygen to produce 3A of EV power (6144 EU/t) at 150% efficiency. Note that oxygen boosting requires an IV dynamo hatch, and must be transformed down to EV if you want to use it for EV power.

Compared to a regular Large Turbine (Steam, HP Steam, Plasma, Gas), this multiblock does not need fluid regulation into its input hatch. It also does not need a rotor in its GUI. Because of this, the multiblock will always produce either 2048 EU/t (unboosted) or 6144 EU/t (boosted).

To calculate how much fuel per tick you need to feed into this multiblock, take the EU/L value of the fuel and divide it from the target power output. For example, if we wanted to generate boosted output (6144 EU/t), and we wanted to use Cetane Boosted Diesel (720,000 EU per cell, 1,080,000 at 150% efficiency from boosting, or 1080 EU/L) as our fuel, we would need to generate 6144/1080 = 5.688 L/t of fuel. This means that, as long as you have a cetane generation rate of 5.688L/t somewhere in your base, you are guaranteed to be able to run the multiblock non-stop, barring any maintenance issues.

Because of this, it's also worth noting that you can redstone control (either with a fluid detector on your supply of fuel, or with an energy detector on your battery buffer/power station) exactly when the multiblock is activated so as to conserve fuel when energy generation is not possible with the current fuel reserves or if energy generation is just not needed yet. Since the engine has a ramp up time, you need to make sure the engine isn't turned on and off at high frequency. Ideally, you want to turn it on when your stored energy is almost empty and turn it off again when it is nearly full. This can be realised with a RS Latch.

Rocket engines are EV-LuV single block combustion generators, added by GT++. Ther run off rocket fuels, instead of normal combustion fuels. They have a weird behavior for fuel consumption, in which they only use fuel every other tick, but supply constant voltage. This essentially doubles the tooltip efficiency.

There are 4 type of rocket fuel to run rocket engine. They're mostly semi complex fuels, however currently most are either power negative to produce, or don't make much power compared to their alternatives. Using them is possible, and their eu/t output being the highest any oil based generator makes them almost viable.

An alternative to oil is bio diesel. Bio diesel is produced using seed oil or fish oil (from fluid extracting various seeds and plants, or fluid extracting fish), ethanol or methanol (from fermented biomass or chemical reacting CO2 or CO with hydrogen), and sodium hydroxide, from chemically reacting water and sodium, or from electrolyzing salt water. Bio diesel gives only 256,000 EU per cell, but is fully automatable and renewable. Bio diesel can be turned into cetane-boosted diesel, giving 720,000 EU per cell, but only gives 750L of cetane-boosted diesel per 1,000L of bio diesel.

Retrieved from "https://gtnh.miraheze.org/w/index.php?title=Combustion_Generators&oldid=2143"
Categories:
Cookies help us deliver our services. By using our services, you agree to our use of cookies.