Welcome to Spluff's guide to the biotechnology elements brought to GT:NH by Bartwork's Biolab and Vat. Here, you'll find a guide to using these machines as well as a primer to the real science behind how they work, which will hopefully make understanding how to use them easier.

The Biolab is a one stop shop for all your biotechnological needs. Because it has so many different functions, which type of recipe it is able to perform at a given time is controlled by the module placed in the slot at the lower right of its inventory. If no module is inserted, the biolab will simply extract bacteria from items/fluids inserted into it and place them in a sterilized petri dish as a new culture.

The DNA Extraction Module allows the DNA of a specific species of bacterial culture to be taken from the petri dish and placed in a DNA Sample Flask. This process requires distilled water and ethanol cells, as well as detergent, which can be extracted from vines, to break open the membranes of cells.

The PCR Thermocycle Module allows the sequence of DNA in a Sample Flask to be read and stored digitally in a Data Orb as Gene Data. In real life, for this process to work, the DNA is first heated to cause the two strands of the double helix to separate from each other. The DNA is then cooled, allowing the polymerase enzymes provided in a cell to begin building a new strand of DNA opposite both of the originals, forming two new double-helices from the liquid DNA added to the machine.

The fluorescent DNA provided can sometimes be used in building the strand instead of the normal liquid DNA. When this happens, the building of the particular that strand will stop. Later, a laser can read the DNA, which will shine a different color depending on which nucleic acid (A, T, C, or G) is at the end of the strand. Over many cycles, the letter at every position in the gene is read, eventually building up the whole sequence in the computer.

The Plasmid Synthesis Module allows Gene Data to be written onto a blank plasmid. Plasmids are small loops of DNA separate from a bacteria's main chromosome that can hold genes the bacteria wouldn't normally have. By artificially including genes from different species in a custom plasmid, the plain, easy-to-grow E coli bacteria the plasmid is given to can create all kinds of products. This process requires liquid DNA and enzyme solution to create the custom piece of DNA and insert it into the plasmid. The Gene Data for the beta lactamase gene is also required to make a plasmid that can be reliably given to the bacteria, which is more important for the Transformation Module

The Transformation Module allows a Sample Flask containing plasmids with a custom gene to be inserted into a bacterial culture, giving that culture the custom gene. The module generates a rapid electromagnetic pulse that opens small holes in the cell membrane, allowing the plasmids to enter. However, this process is not 100% efficient and some individual cells in the culture will end up with no plasmid. A cell of penicillin is included to kill all the cells that were not successfully transformed, leaving only the cells with the custom gene. The surviving cells are not killed because the beta-lactamase gene included in the plasmid allows the bacteria to create an enzyme that destroys the penicillin before it can kill the cell.

The Bacterial Vat is a machine used to process items/fluids using the biological activity of a population of bacteria. A bacterial culture on an agar plate must be supplied to the machine to start the population off. 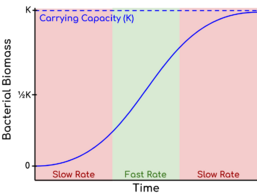 The sigmoidal population curve that describes how the amount of bacterial biomass changes over time in the Vat.

A population of bacteria in a closed system, also called biomass, will grow according to a sigmoidal population curve (right), where growth rate is initially slow due to a small starting population, increases in rate as the population increases, and then slows again as the resources of the environment become too scarce to support such a large population. This last concept is known as the environment's carrying capacity (K), which is the maximum amount of bacterial biomass the system can support. In GT:NH, K is dictated by the size of the Vat's output hatch.

In order to keep the size of a growing population stable, bacterial biomass must be removed from the machine as fast as the bacteria are replicating. Therefore, to maximize the production of the Vat, the bacteria must be maintained at the population that gives the highest growth rate. This is illustrated on the curve, where the growth rate can be seen as the steepness of the slope of the curve. At a biomass of ½K, the curve is the steepest and so the rate at which the biomass can be drawn off without reducing the population is the highest. Mechanically, this manifests as the Vat gaining up to a 1000x bonus to production is the output hatch is maintained at half capacity at all times.

Some more exotic and alien species of bacteria require radiation to grow properly. The strength of this radiation is measured in sieverts (Sv). Radiation is supplied to the vat via the radio hatch, which come in HV-UV voltages, each tier having 1 kg greater buffer capacity than the last. Rods or long rods of radioactive material are placed in the radio hatch where they are consumed, filling the buffer and supplying radiation at the given material's sievert level for a given amount of time. Rods supply 1 kg to the buffer while long rods supply 2 kg.

Some recipes require very specific different sievert levels. Instead of having to hunt for a different material for each of these recipes, a shutter can be closed to block some of the radiation to reach a more customizable value. Using a screwdriver on the radio hatch will open the radiation shutter interface, where up to 100 Sv of radiation can be blocked. Note that blocking radiation does NOT make the radioactive material last longer.

Retrieved from "https://gtnh.miraheze.org/w/index.php?title=Biotechnology&oldid=2236"
Category:
Cookies help us deliver our services. By using our services, you agree to our use of cookies.